I was far away from the blog for almost two weeks. I was really tired because of sudden happenings in my life. I didn't really wanted to cook anything at all. But thanks to my aunt I had some sushi and other hot dishes. I wasn't sick or out of money. Just 2 weeks ago my father died.

We didn't speak at all in the last 10 years. I can say he wasn't a careing person at all except for himself. But strangely his death shaked me more than I thought it will. Maybe that's because I hoped for some kind of distant father-daughter connection. Hoped that someday he will be enough adult not to push me away. But this will never happen now.

I didn't say this to many of my friends and people around me. Those who know me, know that I can't really ask for help or emotional support. If someone see that I need a hug or comfort than I gladly accept it but unfortunately I hardly can ask for it. So I'm sorry if anyone feels cheated but this not means that I don't trust you. Just I know that people can't do a thing with death. They don't know what to say since what they feel is the relief that they are alive and that's ok.

So this way was much easier to tell this situation to everyone without bad taste in my mouth. I love you all, you are in my trusting heart. That's all. Now let's see the dish.

During the weekend I wanted something light. At least I had enough time, drive and energy to cook something. With a miracle an eggplant and two tomatoes survived the last two weeks in my fridge so I used them up now for a grill. 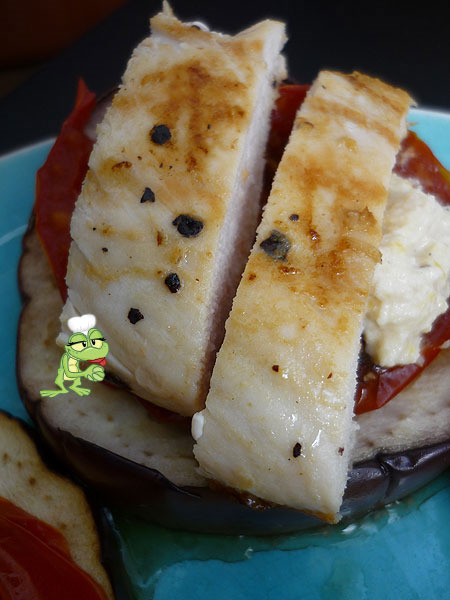 I washed the veggies than cut them into circles. With a little bit of olive oil I grilled the eggplant on my grill pan. When they were almost ready I put on top of them a slice of tomato and turn it over. So the tomato was under the eggplant. It was ready in a few minutes to take it out.

In the meantime I put the chicken in a plastic bag, spill some olive oil, lemon zest and freshly ground pepper on it. If the meat is too thick I usually smack it through the bag with the hard glass of the oil. As long as the veggies are in the pan the meat will be marinated enough.

In the same pan I grill the chicken and after cut up into little pieces. At the end those mouthful sized chickens are being put on the veggie hills. Before we started to eat I decorated every veggie hill with a spoonful of home made humus.

All in all it was a healthy, light sunday dinner.