Um, it was a long time ago that I practiced my english on you, dear reader, so please be nice to me.

When I first made this recipe the sunny was shining warmly and summer was approaching around the corner. And 3 good friends was busy making something good to eat in the kitchen. With agent Zs and Á, we made this lasagne for the second time.

I don't really like tomato sauce so I had to replace it with something else. The cream was an easy choice since when I ate pizza (once a year) I always asked for it with cream base not tomatoe sauce. So how comes in the picture the spinach? It was in the frige so I decided to try out. Hoped it will be good and it was delicious. 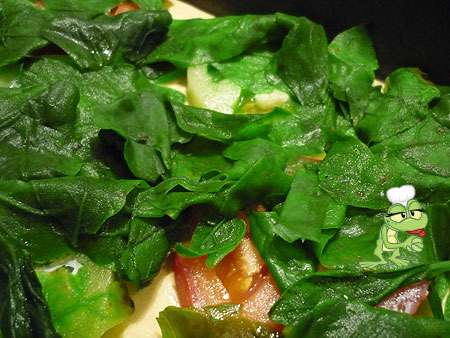 1, wash the spinach then cut off the stems. Boil a pot of water and cook the spinach for 3 minutes in it. After that strain it and put aside.

2, grease your baking pan with a little bit of olive oil and put a layer of lasagne pasta on it. Lay some of the tomato slices on it and cover with some spinach. 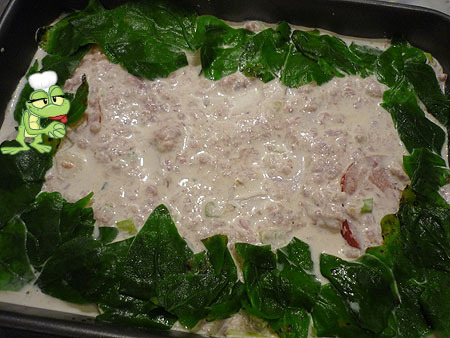 3, crush the cleaned cloves with a knife then toss it in a pan with the meat. Don't fry it thoroughly just give it some fire and taste with the cloves and spices.

4, pour the cream nad clotted cream into a bowl with the leftover tomato slices, rosemary, meat and a bit of green onion. Stir it together carefully and pour it over the lasagne and spinach.

Why I say carefully? Because I managed to splash it out two times because the cream was so light. 5, put another layer of spinach over the sauce than put on another cover of lasagne. I know it's not to high with pasta but this is a diabetic recipe. And most of the carbs are in the lasagne pasta so you have to cut a bit on it.

If you have questions feel free to ask in e-mail - perszephone83@gmail.com